HVAC systems are energy-intensive. They are generally responsible for a significant proportion of a cultivation facility’s energy consumption. This makes sense if you consider how an element such as latent heat is very difficult and energy-intensive to remove from a space.

However, as sustainability takes center stage and the need for sustainable cultivation practices intensifies, high energy consumption is now an issue that requires urgent addressing. One of the critical factors that need addressing is the use of brute force to cool and dehumidify.

Brute force is an approach used to control humidity. When using brute force, the air in a cultivation space is overcooled to reduce humidity then it’s reheated to achieve the desired temperature. Seems counterproductive, right?

This goes to show why the use of brute force is not such a great idea. Not to speak of how costly brute force is, or the fact that the whole reheat/overcool process is generally disallowed by the American Society of Heating, Refrigerating and Air-Conditioning Engineers (ASHRAE) standard 90.1-2010.

The Harvest wheel is a rotary heat exchanger used for indirect air-to-air economization. In the industry, the wheel is known as an enthalpy or total energy wheel. The use of the name “Total Energy wheel” stems from the fact that as two different air streams pass through the wheel, both heat and humidity (i.e., the total energy in the air) are transferred.

Humidity transfer is very similar, but we can’t feel it or see it. As two different air streams pass through the wheel, moisture is absorbed and released, respectively. Much like heat transfers from high temperatures to low temperatures, the same is true of humidity, only it transfers from high humidity to lower humidity. So as the wheel rotates through the separate air streams it transfers moisture (humidity) from higher humid air to dryer air.

Are you familiar with the little silica gel packets often found in shoeboxes? Those packets placed in packaging for products that are susceptible to moisture, as a way to keep them dry during transit? That same silica coats the Harvest Air Wheel, removing moisture from areas of high humidity.

The wheel is 85% efficient, allowing compressors to stay off as much as possible. When you consider that the most efficient compressor is one that’s not running, you can see just how great the wheel’s high efficiency is. 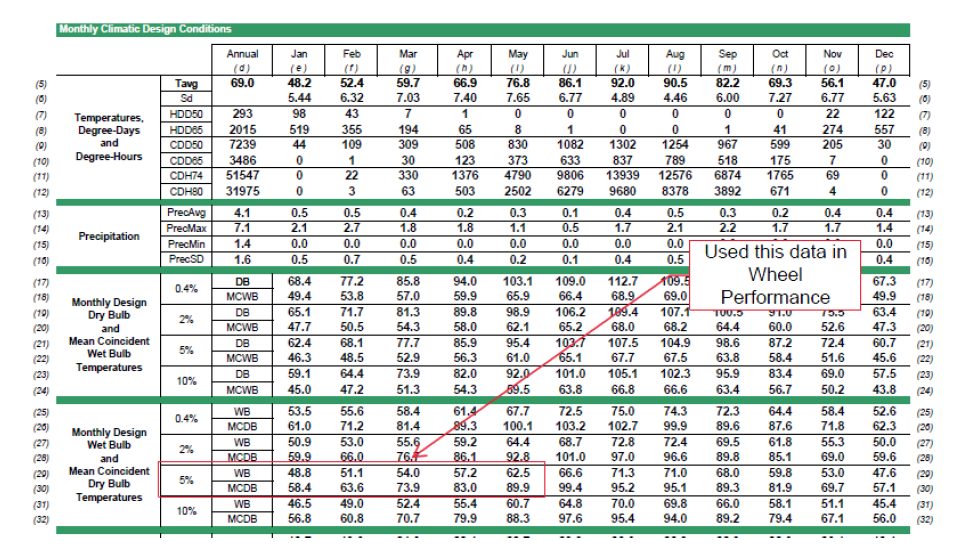 Conversely, if the humidity in the outside air is lower than the grow space return air, then the wheel will transfer the humidity from the grow space to the outside air. We noted the resulting condition of the air, after the wheel has performed the heat and humidity transfer, at Point #3. To be clear, Point #3 is after the wheel and before the DX coil, so the DX system (i.e., compressors) will do any further conditioning of the air.

Let’s walk through the January example.

A Harvest Air Wheel selection was made representing “January,” as noted in the wheel performance example spreadsheet. Let’s start with the heat. As discussed above heat will transfer from higher temperatures to lower temperatures.

For January, the outside air, or “heat-sink,” is 58.4 degrees, compared to 78 degrees in the grow space return air. As a result of the heat transfer through the wheel, the supply air temperature off the wheel is 64.4 degrees. In other words, the 58.4-degree wheel was able to remove 13.6 degrees (78 – 64.4) from the grow space air.

More important is the humidity. Relative humidity by definition is a relative metric, so it changes as the temperature of the air changes. In HVAC design, a more accurate metric is absolute humidity, which is a direct measure of the amount of moisture in the air. Absolute humidity is defined as the “grains of moisture per pound of dry air,” or gr/lb.

You can follow the other examples as they relate to other months, but in the end, why is this a big deal?

Currently, the only way to remove humidity from grow room air is by condensing it out of the air, similar to a glass of iced tea. You have to cool the temperature of the air down to below its dewpoint before you can remove the humidity, or in the case of the glass of tea, before water droplets form on the glass. Mechanical refrigeration is the only way to accomplish this, and whether that comes in the form of a direct expansion (DX) or chilled water system, compressor energy still has to be spent to drive the temperature of the air down to the dewpoint.

Furthermore, by using mechanical refrigeration, you can remove the humidity, but consequently, the air is too cold to directly supply to the space; often near 50 degrees. This forces a “re-heat” scenario where you’ll require even more energy to re-heat the air before it is delivered to the space.

Although Harvest  Air units still use DX cooling, using the wheel as the primary source of cooling and dehumidification allows growers to effectively turn their compressors off 50%+ of the year, saving energy and improving their bottom line.

Looking to switch to a more efficient HVAC system and create a more sustainable indoor cultivation space or greenhouse? Contact us today!