What’s the difference between dew point temperature and wet bulb temperature? How does sensible load relate to the sensible heat ratio? And what’s the link between Btu and kWh?

We understand. The HVAC space can be a complex maze of acronyms and terms, some of which are connected and add to the complexity. But do not fret, we’ve compiled the following list of key HVAC terms to help you navigate the common terms you’ll likely come across when making your HVAC selection and purchasing decisions. 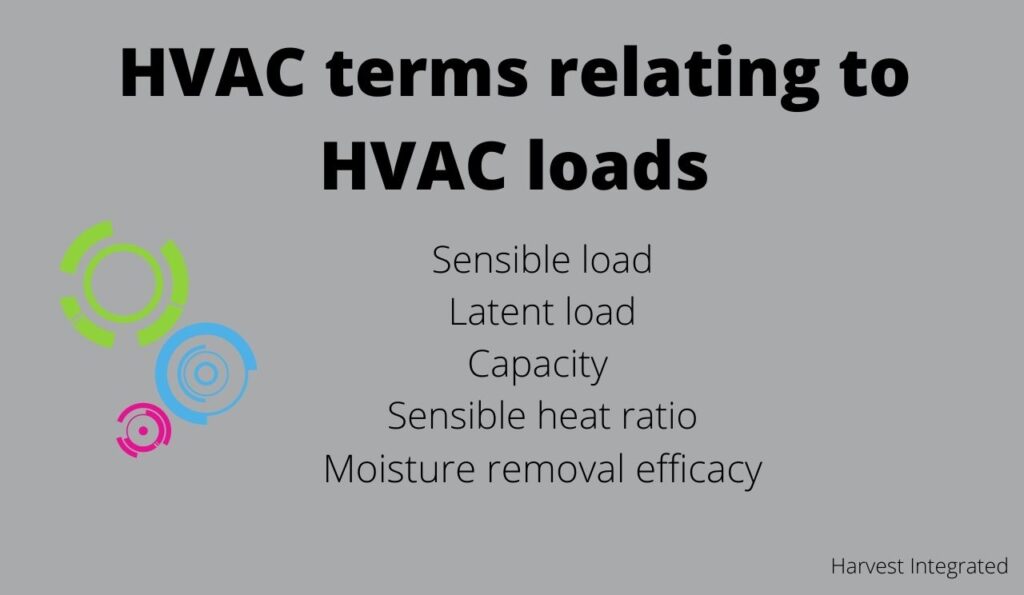 Your HVAC system has to maintain the humidity and temperature ranges preferred by the crop you’re growing. To do this, the system must be able to keep up with the heat and cooling loads in the grow space. Therefore, it’s essential to know the terms relating to these loads.

Let’s start with sensible load and latent load. You need to understand the difference between these two fundamental terms (plus the ratio of the two) if you’re going to understand HVAC loads.

Sensible heat load essentially refers to the heat you can feel – you can think of it as a dry load. With sensible heat, the temperature of an object increases without any phase change. So in a grow space, this would be the heat associated with things such as your grow lighting or warm weather.

A lot of conventional  HVAC systems are designed for high sensible loads that lie in the 75-80% range. However, this can lead to problems in cultivation facilities, which are known for their particularly low sensible heat ratios. We digress, but you can read a bit more about this in one of our blog posts on HVAC system sizing and cost.

Latent heat load refers to the energy released from or absorbed by a substance during a phase change. The distinction with latent heat load is that the temperature remains constant during the phase change. In cultivation facilities, latent loads mainly come from evapotranspiration (don’t worry, we’ll define this a bit later), so you can think of them as wet loads.

This means that conventional HVAC systems, with their limited latent capacity, won’t work in indoor cultivation facilities. They are not designed to handle large dehumidification loads, and are, therefore, a poor fit for indoor grow environments. You can check out this piece to find out why specialized HVAC systems work better.

The sum of the latent and sensible heat loads determines the total cooling load an HVAC system needs to be able to take care of in a grow space. Consequently, a ratio of these two is used when sizing HVAC.

It means that around 40-50% of the total loads in cultivation spaces are associated with latent load – a huge problem when using conventional HVAC in an indoor cultivation space. You’ll probably need extra dehumidifiers in the space to take care of the extra latent load the HVAC can’t handle.

Unfortunately, this is a recipe for inefficiencies since the extra standalone dehumidifiers will likely emit substantial amounts of heat in the grow space through latent heat. The result? The sensible loads of the space will increase, the HVAC system will have to work harder and more often, and you will have to deal with higher energy bills!

Other key terms to keep in mind when dealing with HVAC loads are:

This term describes the effectiveness of a dehumidification system.

MRE = the water vapor (moisture) removed from the air at a specific humidity and temperature / total energy consumed by a specific piece of dehumidification equipment.

Capacity is an HVAC system’s ability to satisfy a space’s loads, i.e. a system’s ability to provide a specified amount of cooling, heating or moisture removal. When choosing HVAC equipment, it’s generally a good idea to consider the equipment’s capacity and the peak loads in a grow environment. To size the equipment right, the capacity and loads should match as closely as possible.

Do note that although rated capacity is often used in sizing conventional HVAC equipment, it’s unlikely to represent the actual capacity or performance in cultivation spaces due to the unique nature and unusual loads of these spaces.

Let’s move on to some key terms relating to the environmental conditions in grow rooms. 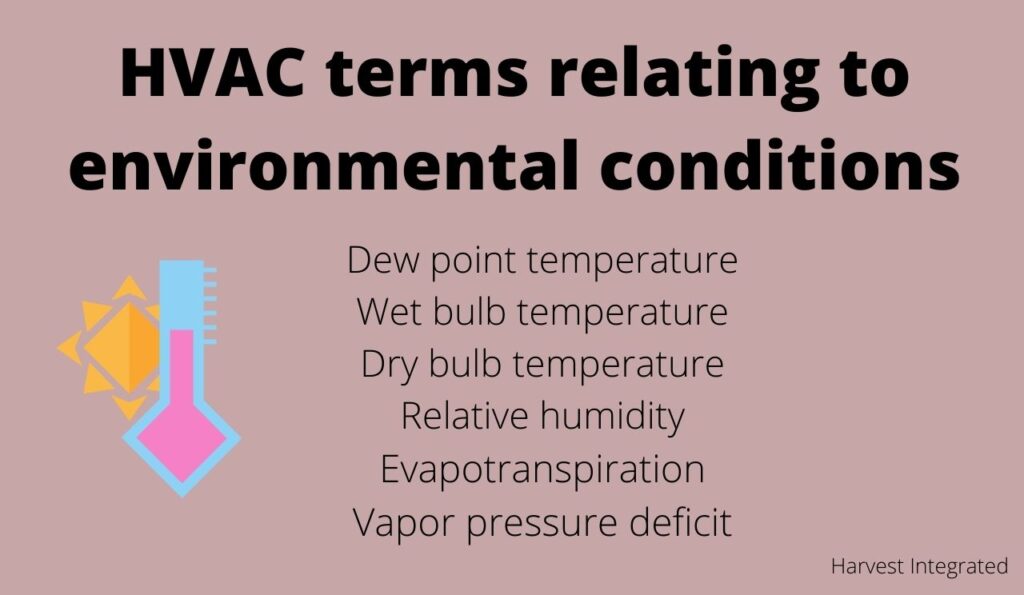 Air saturation occurs when air is holding the maximum amount of water vapor it can at any given temperature. Warmer air can hold exponentially more water than cooler air, and vice versa.

This temperature describes the amount of moisture in the air. Although HVAC designers and engineers may use wet bulb temperature when calculating HVAC loads, this temperature is usually not used and considered unimportant in the everyday operation of a grow facility. However, it’s relevant in facilities where growers use evaporative cooling equipment.

This is the temperature at which air is saturated with moisture/water vapor and cannot hold any more. Dew point temperature is used to calculate vapor pressure deficit/differential (also to be defined in a bit).

Since the air can no longer hold all its moisture at the dew point temperature, condensation occurs. This is why this temperature is associated with the formation of condensation on surfaces within a cultivation space and on the plants themselves.

As mentioned before, the amount of moisture in the air at a given RH depends on the air temperature. This is why RH is relative – hot air can hold more water than cold air. For example, 90-degree air at 100% RH has way more water vapor in it compared to 40-degree air at 100% RH. Because of the connection between temperature and RH, any RH values without dry or wet bulb temperatures won’t give much information about the total amount of moisture in the air.

Note: When the dry bulb and wet bulb temperature are equal, the air is at 100% relative humidity.

Since plants require different RH ranges at the various growth stages, growers can use different RH ranges to influence crop growth and increase yield. And in case you’re wondering why RH spikes when grow light are off, there’s a good explanation… When the lights are off, the air begins to cool. However, the amount of moisture in the air doesn’t reduce at the same rate as the air cools and so the RH increases.

VPD is normally described using kilopascals (kPa) and target VPDs typically vary by the plants’ growth stage. But generally, a good VPD range in cultivation spaces is between 0.8 and 1.2kPa. A VPD lower than 0.8kPa will inhibit transpiration, slow the plants’ nutrient and water uptake rate, and ultimately, slow plant growth. On the other hand, a VPD  higher than 1.2kPa will result in too much water uptake and likely lead to water stress.

All these elements are important when working with HVAC. For example, temperature and relative humidity will affect the VPD in a cultivation space and how much work an HVAC system has to do. Additionally, when selecting and sizing HVAC equipment, you’ll need to know the relative humidity, dry bulb temperature and VPD (or at least two of these three values), to be able to set the right climate control setpoints.

Btu is a measurement of heat energy. It’s the amount of heat required to increase or decrease the temperature of one pound of water by one degree Fahrenheit. This measurement is often used to specifically quantify the energy an HVAC system uses to cool and dehumidify a space.

Btuh is used to quantify the energy an HVAC system uses to cool and dehumidify a space in an hour. It’s the benchmark used to estimate the capacity of HVAC systems. Therefore, it’s an important metric in the HVAC space, especially when it comes to sizing HVAC systems.

kWh and Btu both describe energy consumption, but it’s important to note that kWh is for electrical energy. And so while some people will use kWh to describe total energy usage in a facility, Btu is the better unit to use. However, kWh can be converted to Btu (1kWh = 3,412.14Btu). This means that when calculating total energy consumption, you can easily convert your grow facility’s kWh of electricity into Btu.

CFM is a measurement of airflow volume and it’s used to match the size of an HVAC system to the size of the space being cooled and dehumidified. A system that’s too big will cycle on and off too frequently, while one that’s too small won’t be able to provide enough cooling, heating and dehumidification. Both systems also result in wasted energy.

Find out more about CFM and Btu in this comprehensive guide to grow room ventilation.

And a key grow room problem relating to HVAC

So this last one is not really an HVAC term, but it is a common problem related to HVAC so we think it deserves a spot on this list.

Powdery mildew is one of the most common fungus problems that affect various crops (including cannabis) in indoor cultivation spaces. In most cases, powdery mildew indicates improper climate control in a grow space, and in the worst cases, it can lead to crop loss.

A good HVAC system is essential for avoiding powdery mildew, therefore, correctly sizing said system is vital. This is where the other terms we have looked at in this article come into play, helping you navigate the HVAC sizing and selection process.

Your HVAC system will be one of the biggest investments you make as you run an indoor grow operation, so it’s a must to have a good grasp of terms and understanding of how HVAC systems work. Of course, there are other terms we haven’t covered in this piece, but these key HVAC terms should help you navigate the world of HVAC with ease.

And if you need help with deciding on the best HVAC system for your indoor grow, we’ve got this quick guide to help you get started on the right system selection path. Happy reading!