How To Build An Energy-Efficient Cannabis Greenhouse

Harness the power of the sun while protecting your crop from extreme weather conditions. Leverage year-round cultivation to boost yields and business growth. Reduce the accessibility of pests that can harm your crop.

All this with a cannabis greenhouse.

But greenhouses – particularly commercial ones – are not without their issues and running a successful greenhouse cannabis growing operation is no easy task.

One of the biggest problems is that greenhouses are typically high energy-consuming. Energy is usually the largest overhead cost in the production of greenhouse cannabis, accounting for half of the total costs in some cases.

In a dynamic and volatile industry where profit margins are tight and sustainability issues are taking center stage, it’s imperative for you, the grower, to run your greenhouse the energy-efficient way. Your reducing costs, achieving sustainability, staying competitive, and succeeding all hinge on this.

The following list outlines some of the top measures and strategies you can adopt to optimize energy use without compromising on greenhouse production efficiency. 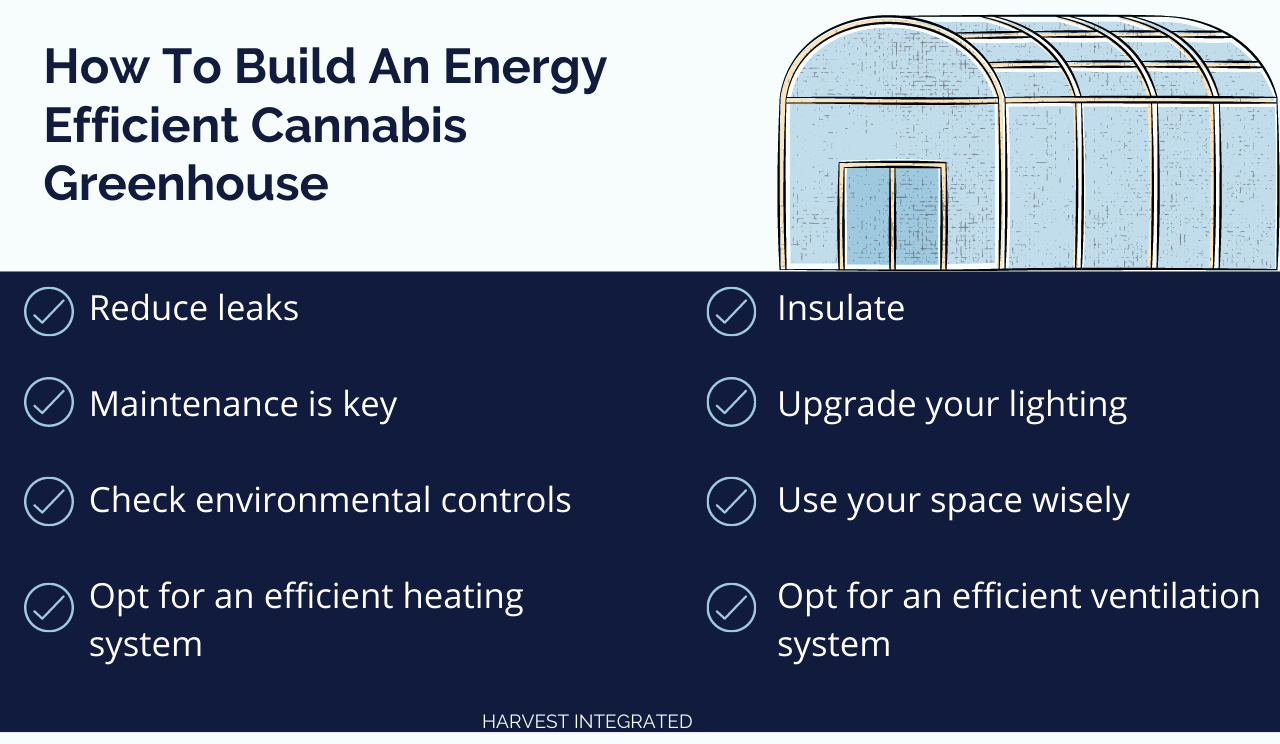 1. Find and reduce leaks in your cannabis greenhouse

A lot of greenhouses are very “leaky” – they have wall or roof openings, cracks, and holes that let cold air leak into the growing space. As cold air leaks in, the heating system has to constantly reheat the space, resulting in higher energy consumption.

Some good ways to reduce leaks in your cannabis greenhouse:

Greenhouses, cannabis ones included, are designed to allow the most sunlight into the growing space. Unfortunately, they often have limited insulating properties. The same clear panels that let light into the greenhouse are poor insulators and they make greenhouses lose heat at night or during winter months through radiation, conduction, and convection.

So how do you avoid this loss of heat? 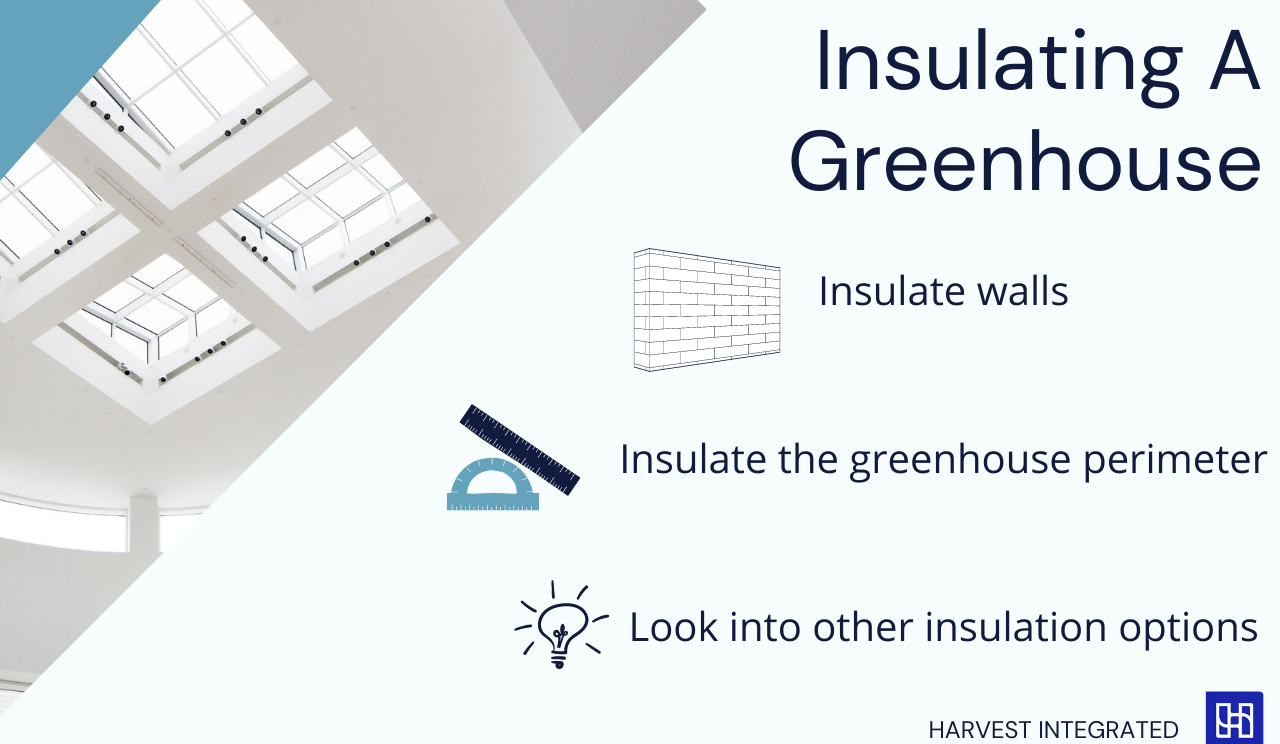 You can modify greenhouse walls to improve their insulating capacity with little to no impact on light transmission. This is especially useful for the north-facing sidewalls, and here’s why. The north wall of a greenhouse lets in very little light, especially during winter, making it easy to lose heat in the greenhouse.

In the past, one of the common solutions to this problem was to add temporary insulating boards to the entire wall to reduce heat loss. While this is still a viable solution, it has an impact on light transmission. A better way to insulate the north wall is to cover it with plastic bubble wrap.

A lot of heat is lost along the greenhouse perimeter (at ground level) during winter. This occurs for a simple reason – wet soil is a good heat conductor.

You can reduce the heat loss by installing an insulating barrier (e.g. a thick polystyrene board) that extends down into the soil along the greenhouse’s perimeter.

Consider other ways to insulate your cannabis greenhouse

There are other methods to up your greenhouse insulation game. For example, you can install polyethylene film and use a thermal screen.

Polyethylene films have seen many improvements over the years. Manufacturers are now creating double polyethylene (double poly) film that allows for easier installation in the double layer configuration.

Also, some films now block infra-red (IR) radiation. During the day, less radiation enters the greenhouse, thus reducing the need for ventilation. At night, the greenhouse loses less heat to the outdoor environment, dramatically reducing energy consumption in the space.

While IR polyethylene film is more expensive than standard film, the energy savings are significant. And if you’re on a tight budget, but still want some energy efficiency, install the IR film as the bottom layer and standard film as the top layer to reduce costs.

Note: Some IR film also comes with an anti-condensation coating. The coating allows water droplets to run down the film rather than onto the crops.

Besides polyethylene films, you can use thermal screens to insulate your greenhouse. These screens can serve double duty – retaining heat to provide thermal insulation in the greenhouse during cold periods such as winter and nighttime, and providing shade from excessive heat and sunlight during hot periods. Thermal screens can provide heating cost savings of up to 40%.

The cost of running cannabis greenhouse lighting is high so it’s important to upgrade to an efficient lighting system. For instance, many greenhouse cannabis growers still use 400-watt or 600-watt HPS fixtures with magnetic ballasts. Both options are relatively cheap, but they are highly inefficient, especially when poorly maintained and not replaced on time.

When upgrading your lighting, also consider using reflectors. These can direct more light to the plants, making it possible to reduce the number of light fixtures needed in the greenhouse.

4. Opt for an efficient heating system

There are many reasons why your greenhouse heating system can become less efficient over time. For example, poor system maintenance can result in many problems such as:

Make sure to replace an inefficient system to increase energy efficiency in the greenhouse.

5. Opt for an efficient ventilation system

Maintaining optimum growing conditions in a greenhouse requires replacing the warm and humid air within the space with cooler outside air.

When designed well, a greenhouse’s ventilation system can provide this cooler and typically drier air with precision, thus reducing overall energy consumption in the greenhouse.

The following are some top ways to increase the efficiency of your ventilation system. 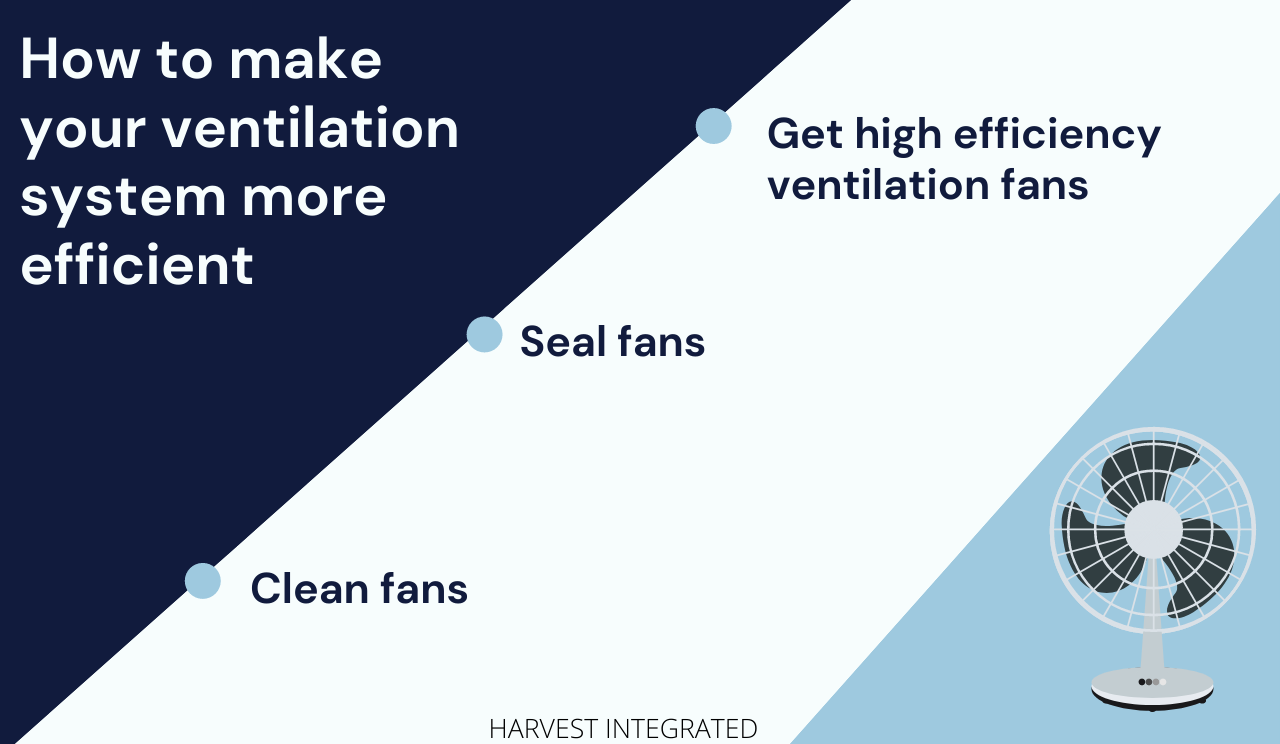 To ensure the efficiency of HAF fans:

Ventilation fans are not created equal. A cheap model is not necessarily the most energy-efficient so it’s important to consider this when choosing a fan. In most cases, high-efficiency ventilation fans are more expensive, but they are often worth the extra cost.

Nonetheless, remember that keeping the fans clean is vital. Even if the fans are high-efficiency models, accumulated dirt and dust can increase energy use.

Ventilation fan openings usually close automatically when the fans are turned off. However, leakages are still common on the fans themselves (e.g. due to malfunctioning openings) and also around the fan housing (e.g. due to drilled holes). The leakages result in higher heating costs. As such, it’s crucial to repair any malfunctioning fan components, insulate the fans, and cover any gaps.

Controlling the various environmental parameters such as temperature, humidity, lighting, irrigation, and CO2  is crucial in a cannabis greenhouse. Yet, you should avoid certain environmental control interactions if you’re going to create an energy-efficient space.

Operating your extractor fans when adding CO2 to the space. The fans will suck out the CO2 as they extract air.

You can prevent such conflicts by using controllers that optimize each environmental parameter.

Related Reading: Find out more about controllers in this Ultimate Guide to Grow Room Controllers.

7. Use your cannabis greenhouse space wisely

Space utilization may not be the first thing that comes to mind when you think of increasing energy efficiency in a cannabis greenhouse, but the more plants you can fit in the space, the lower the energy you will use.

Think of it this way. If your greenhouse is only half full, you still have to heat and cool the entire greenhouse regardless of how many plants you have. If you use a racking system, on the other hand, you’ll have more plants in the space, but you are still using the same amount of heating energy. The increased capacity versus the constant energy usage reduces climate control costs.

If you want to obtain the highest energy efficiency in your cannabis greenhouse, regular preventative maintenance is essential. Whether you use mechanical or automatic control systems, it’s worthwhile to inspect that everything is running properly.

Some top things to check and maintain include your heating, cooling and ventilation systems, and your lighting.

When you think about the rising energy costs, achieving energy efficiency in your cannabis greenhouse is a great way to reduce your operating costs and improve your operation’s profitability while increasing its sustainability. We hope that some of the suggestions above will help you make your greenhouse as energy-efficient and cost-effective as possible.

And if you’re looking for an even better way to increase your cannabis greenhouse’s efficiency, it may be time for a sealed greenhouse. Sealed greenhouses have many of the benefits of indoor grows, including the use of specialized HVAC systems that are highly efficient compared to traditional systems.

Learn more about sealed cannabis greenhouses in Why Invest in A Sealed Greenhouse: The Case For Cannabis Growing.